Applications for the ENERGY GLOBE Award are now being accepted and will remain open until 21 November 2017. According to its website, “The objective of the ENERGY GLOBE Award is to present successful sustainable projects to a global audience and to demonstrate that for many environmental problems feasible solutions already exist.” 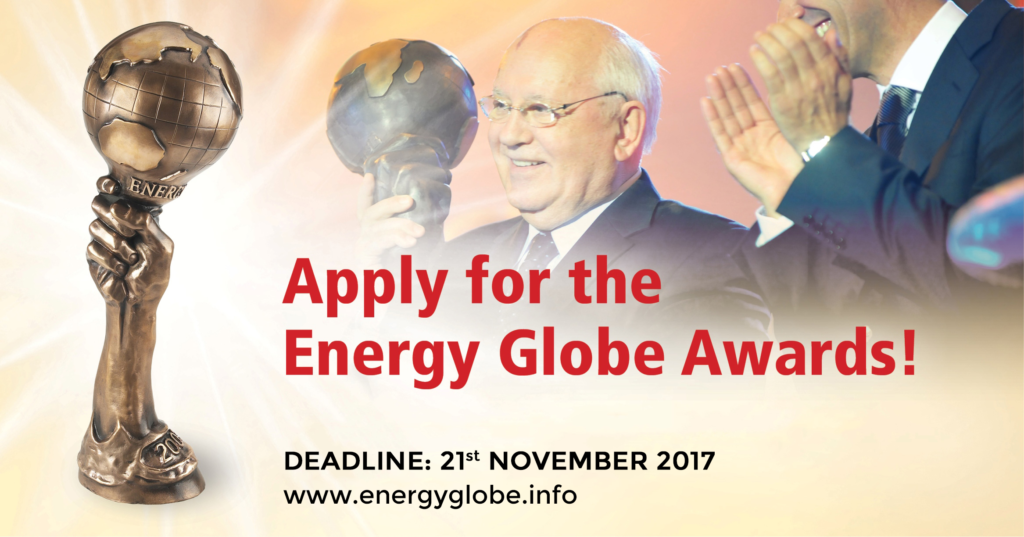 The Award competition is open to any individual, private or public institution, company, NGO or any other types of groups or organisations. “Participation is open to projects which focus on resource conservation, improving air and water quality, energy efficiency and renewable energies” adds the website.

There is no cost involved with submitting an entry and individuals or organisations are free to submit more than one entry if they wish to. However, projects that are submitted must have already been implemented or are nearing completion. If a project is not assessable in its current stage it will not be considered. Continuous projects, that are ongoing but have not yet been completed, can also be submitted if they have already demonstrated innovative and shown impressive results to date.

Participants who enter go into the contest to win a National ENERGY GLOBE AWARD as the best project submission from a particular country or an Energy Globe Award as a global winner of six different categories including Earth, Fire, Water, Air, Youth and ‘Sustainable Plastics”. All six global winners will receive a cash prize of 10,000 Euros. The winners will also be honoured as part of a ceremony held in Tehran in January 2018 that will be broadcast worldwide as well as featured by international media.

In 2016, projects were submitted from over 170 countries across the Earth. Individuals and organisations with an interest in improving health by mitigating or reducing the effects of climate change are also encouraged to participate in the Award contest. One project they might draw inspiration from is Mohamed Ramadan’s project on recycling and purifying wastewater which was the 2016 National Energy Globe Award Egypt prize winner.

The project focused on more effectively removing the pathogens, nutrients, suspended solids and other organic pollutants from wastewater in order to have a safer and healthier environment. Traditionally, a sand filtration process has been used but this depends on the chemical and physical properties of the filter and the nature of the materials that need to be removed but the process can take up to several days. Ramadan demonstrated innovation in his project by adding miswak (a natural chemical used in many Middle Eastern countries for brushing teeth) and titanium to a sand filter. Three filters were then designed, using different combinations of each of these components, and were tested. They successfully resulted in chemical oxygen demand being reduced and total suspended soils being removed by 98.05%. When all three filters were used it resulted in an overall reduction in total organic carbon, surfactants, biochemical oxygen demand and bacteria being reduced meaning that the filters can “Therefore [be considered] a suitable alternative to the time-consuming traditional sand filter.”

The purifying innovation is important because it means people now have a more affordable, option for purifying the wastewater they collect for cooking and human consumption purposes. It also means they are less likely to get sick from consuming wastewater that has not been purified and will be healthier as a result of not being thirsty and consuming chemicals that are good for the body.

The importance of having access to clean, drinking water cannot be underestimated. A joint WHO/UNICEF Joint Monitoring Programme for Water Supply and Sanitation (JMP) estimated that in 2015, 32% of the world’s population (approximately 663 million people) still used unimproved drinking water sources. It adds “Inadequate access to safe water and sanitation services, coupled with poor hygiene practices, kills and sickens thousands of children every day, and leads to impoverishment and diminished opportunities for thousands more.” The international charity World Vision labels “Water [as] a foundational element of life and is vital to the well-being of families.”

In order to enter the ENERGY GLOBE AWARD 2017 competition, participants must complete the application Word document provided on the organiser’s website and meet all the criteria set out in the application checklist. The application, written in either English or German, then needs to be submitted through online submission platform which is also on its website.

Ken Fullerton
Ken Fullerton is a sustainable development consultant with over seven years of professional and volunteer experience. He has worked on projects in Australia, Germany, South Africa, Tanzania and Uganda and presented at international conferences in Ghana, Senegal and the United Kingdom. Ken currently works as a consultant at ARTD Consultants in Sydney, Australia where he supports government agencies and non-government organisations to make evidence-informed policy decisions, co-design service models and delivery strategies, track and evaluate outcomes and continuously improve performance. Ken holds a Bachelor of Arts degree in History from the University of Otago, New Zealand, a Master of Arts degree in Development Studies from the University of New South Wales, Australia and a Master of Public Management degree from the University of Potsdam, Germany. He is a dual Australian and South African citizen.
Latest posts by Ken Fullerton (see all)
Tagged on: energy    energy globe award    sustainability